Where: Gullfjellet, Bergen Norway.
When: May, 2016
What: A route over Gullfjellet, from Osavatnet (north) to Hausdalen (south).
Why: Something on the internet (link in norwegian, plenty of photos).

The mountain, in its native language, is called Gullfjellet. Without knowing the back story, directly translated it would be Gold Mountain, nothing less. I do seem to recall something about how the original meaning of Gull in this context isn’t gold but that’s as far as I recall I’m afraid. For the lack of the complete story, Gold mountain it is.

Anyway, I didn’t see any, gold that is, but I was kind of busy looking at the surroundings, rather than the ground below.

I’ve been meaning to see more of Gullfjellet for some time now. Always thought it would happen in hiking boots, not with a bike. Note how I said with a bike, not on it. There was more pushing than pedalling.

As with a lot of things in life, it seems, the idea came from something I read on the internet. Not long before I had come across a thread on a mountain biking forum, one that tempted me to have a look at this particular route. It described crossing the mountain, although from south to north but I figured I should be able to use the same trail. Granted, the author did describe how some of the route wasn’t rideable but pushing and carrying my bike had been getting to be more of a habit anyway. So a plan took form: to find out for myself not just how rideable but equally important, just how lovely such a day trip might be.

Gullfjellet is a bit over 20 kilometers from where I live and much of the stretch can be done on quiet roads away from heavy traffic. As I have yet to put my current bike on a car, train or bus—coming to think of it, I should do something about that—I had to get there using the same method as my every day transport, by muscle power. Most of those 20 kilometers is on tarmac, which is fine although more gravel would have been welcomed. For all I know there may well be gravel detours that I have yet to discover, in that case I have something to look forward to.

Like here, which I already knew about and—sadly—lasts only for some 300m or so.

Fast forward to the parking lot at the foot of Gullfjellet where I had the opportunity to refresh my map memory. Then, pedal upwards.

It didn’t take long before I was pushing for the most part.

Getting higher I had a bit of a duh–moment when realizing that the thread where I had read about the route was from a very different season, much later in the year, when the snow had had plenty of time to melt.

A slight change of plan

About mid–way there is a hut on the route, Redningshytten (the Rescue hut). From there the plan was to continue down the valley on the other side. A hiker enjoying his lunch outside the hut recommended me to take a different route, one where I would be able to ride much more, he said, which sounded tempting enough. He described the route in detail, so well in fact that it never occurred to me to check the map that I had snapped a photo of earlier. If I had I would have realized that the trail he was describing was one covered in a number of Youtube clips by riders far more skilled than myself, most of them on proper, full suspension mountain rigs, unloaded of course. In other words, I would have chickened out, no doubt! 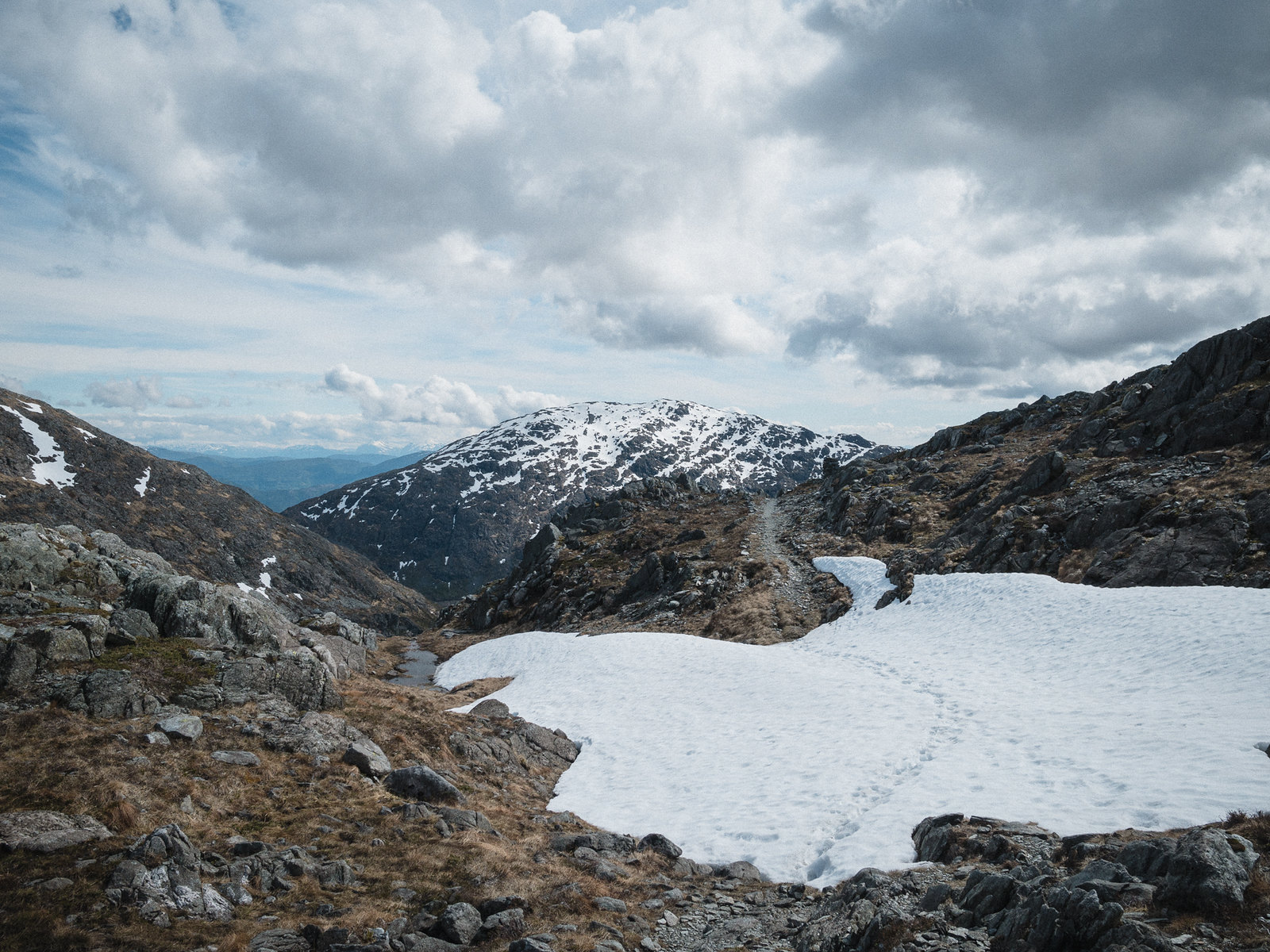 But if for nothing but the view, it was worth every minute.

The trail proved to be partly rideable, even for me, and after much jumping on and off the bike it came to a tractor road, one from the good hiker’s thorough description. And this time he was spot on, even I was able to stay on top of the bike from then on.

At the floor of the valley below, Hausdalen, I was at my destination and time for a short nutrition stop.

From there it was the homeward journey, starting with one of the toughest uphills that I know of around here, about 250 vertical meters over a stretch of just 3km or so. Shorty thereafter, a really nice gravel road up to Totland, and from there I had only about 20km home.

Totland offered the trip’s last gravel road. The final 15 or so kilometers would end like the trip started, on tarmac which is fine I guess, although not my favorite surface. 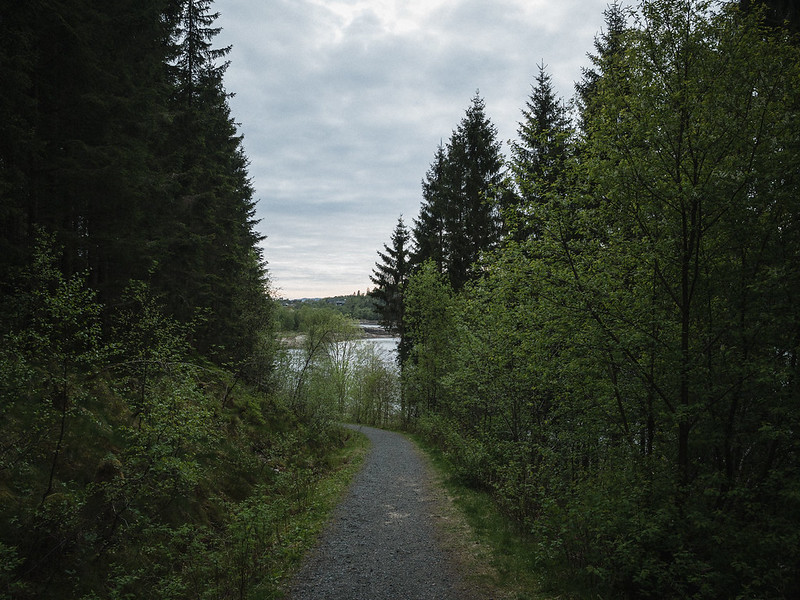 This route over Gullfjellet is no more than some 11,5km, although it certainly felt longer. Longer in a good way.

I had to manually draw up the map as my cell phone ran out of battery on the way, meaning that the coordinates for the mouintain trails are not accurate.

One foot in front of the other